With Flutter 3, you can create Avant-grade experiences for six platforms from a single codebase, freeing up developers’ time to work on other projects and allowing startups to pitch new ideas to the entire addressable market from the start. Flutter app development streamlines the development process and reduces app maintenance costs.

Flutter 3 presents everything the newest Flutter release has to offer. You can now craft Avant-grade experiences that target Android, iOS, web, and Fuchsia OS from a single codebase. Its Material Design-inspired visual language coupled with its high-quality tooling help developers focus on their business logic while reducing app maintenance costs.

The Flutter ecosystem continues to grow to keep pace with the demands of modern mobile development by adding support for new platforms like WebAssembly, as well as offering updated companion tools, including a new debugger and profiler in the new release.

A new update which comes with great features. With this release, we have seen a huge improvement in the rendering speed of Flutter apps on Android, better handling of memory, and an improvement in scrolling performance on iOS by making it less CPU-intensive. In addition to this, Wayland support for Linux users is added in the new Flutter release. An exciting feature that has been added to the 3.0 update is Image lazy loading. Lazy loading allows you to load images only when you need them and not before that – this helps to reduce bandwidth usage and improve application performance and user experience.

In the past, the developer journey for building an app with Flutter was much easier. You could make your widgets, or you could take a UI Kit and call it a day. From there, you were ready to go. With this latest update, that changes. Now there are template libraries (UI) for every possible platform (iOS/Android), with features only available on certain platforms depending on which toolchain you use. The new toolchain allows Flutter to work with your current codebase, which means that you can make more efficient use of existing code and framework updates while still building native apps across iOS and Android.

Google is also releasing several other tools, along with the Flutter Gallery. These tools include:

Design app flows with this tool on your computer before pushing them to an Android device or an iOS simulator. With this tool, you can edit text and style properties across different language versions of your apps at the same time.

Developers can now analyze issues and debug apps on a device in real-time, a feature that was previously limited to iOS only. Now you can see bugs and get support for apps faster than ever before. This is especially helpful for mobile app developers who work with a variety of languages such as Swift and Objective C in their codes.

This tool is a new way of testing apps. It lets you use a real device like an iPhone or Android, instead of the simulator that Flutters previously required. You can now test your app on the device you want to deploy it to, using a version of Google Chrome that has Flutter built-in.

This tool allows developers to create and publish their own custom interactive stories with text, images, and GIFs (with sound effects too). The viewer is now available globally in English as well as in six different languages. For an app that uses Flutter, the tools included in this update mean a lot of cognitive effort can be spared back to the developer.

So now that you know all about it, let’s take a look at this new library and see what it has to offer. Then we can have a look at how developers can use the new tools to build their future apps.

Getting Started With Flutter 3.0: Flutter Gallery App Overview and Basics

With Flutter being an open-source framework, you will find many tutorials online to download or create your app using Flutter with Google’s UI design templates. Some of the most popular UI Kits available on the Flutter Framework include: 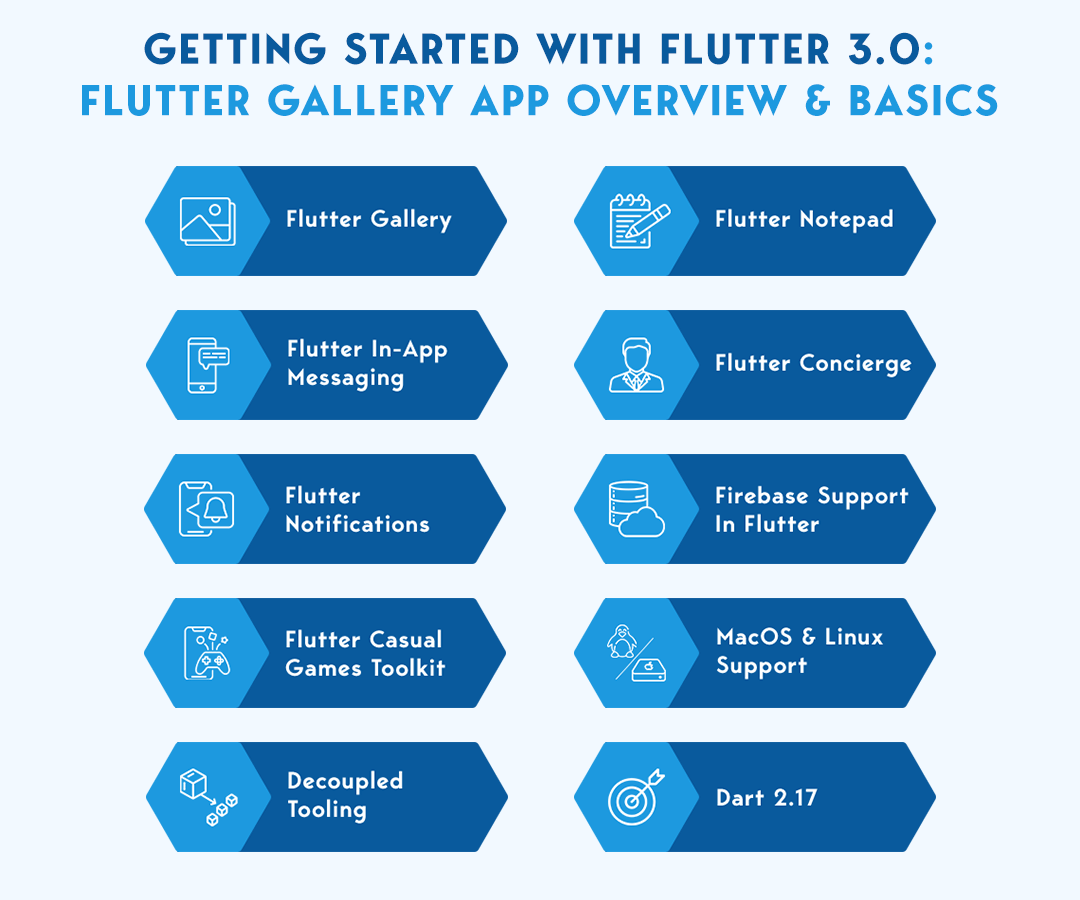 The Flutter Gallery app is a place for artists to show their work and find inspiration through animations for their future designs. It includes select animations from other apps downloaded from Google Play, as well as some inspirational quotes from famous artists. This app also provides designers and developers with more design elements and tutorials than ever before with this latest update.

This app is a note-taking app with an outliner and a built-in content editor that supports built-in themes for apps, and widgets, and sharing them on Google Play. It’s been available in Beta since January of this year.

The Flutter Concierge app allows you to take advantage of the project management built into Google’s Inbox. You can use its data structure to track your ideas and projects in real-time, making it a helpful tool for any developer.

This app allows users to get the notifications they want with this new update. For example, developers can now interrupt an app when their users are viewing specific content by adding custom buttons within the notification itself. Clicking on those buttons will open any respective action in that app, such as a different page or modifying a specific element on that page.

With Firebase being a big part of the Flutter Framework and with the introduction of this latest update, you can now create more robust applications with Firebase connected to your app or website. Firebase offers real-time database, authentication, messaging, and other features for Android and iOS apps. In this new update for Flutter, developers can now access Firebase documentation easily and learn more about how to enable authentication, storage (Firestore), databases (Firebase Database), and messaging (Firebase Cloud Messaging).

This new toolkit contains some tools that make casual game development easier compared to what you see with other mobile gaming platforms such as PhoneGap and Java Wrapper.

Flutter Casual Games Toolkit provides a good starting point for developers to build games based on OpenGL ES graphics rendering extensions, but it also offers a complete set of expressive controls for your games, helping you to keep power over your game design for a better user experience and faster development time.

With the latest update to the Flutter Framework, macOS and Linux users can now build their apps using Flutter on their devices. This means that we’ve reached a new level of high-level computing built right into your phone. We’re just getting started with this, with more functionality coming soon.

With this latest update to the Flutter Framework, we’ve also made some big strides in decoupling the tools from Flutter itself, which is a crucial step for us and ensures that developers have access to the same tools for building apps for different scenarios. For example, prototyping can be done via Jest or earlier versions of React Native have been integrated with this update as well.

The Flutter SDK now comes with Dart 2.17 and with this update, we’ve made some improvements to the type system while maintaining backward compatibility with Dart 2.

This is the first open-source SDK based on the Google Flutter framework which supports the Dart programming language. The Google Flutter team is composed of engineers from Google and entrepreneurs from outside Google who are working to make cross-platform mobile app development fast, fun, and simple. You can learn more about Flutter at flutter.dev or join on Slack (the flutter channel) or Gitter (the flutter Gitter chat).

The detailed instructions for setting up Flutter with Xcode can be found on Xcode’s official documentation page.

Web and Mobile Updates in Flutter 3 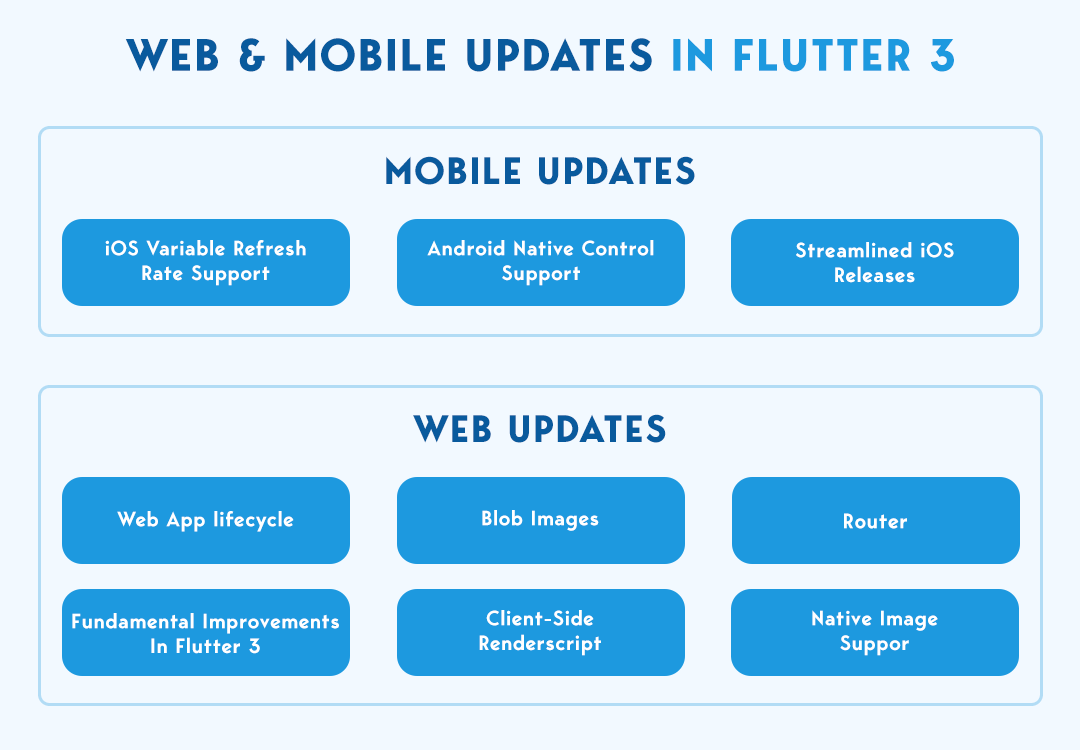 We’ve added support for variable refresh rates (VRR) on iOS with this update to Flutter. To enable VRR on your app, you must set the canPerformRefreshControls() method to true.

We’re excited to be able to announce native controls as a first-class part of the Flutter SDK. Native controls are available for Android and iOS and include dialogs, tabs, images, text fields, pickers, and more. You can read more about native controls in SDK Docs or check out the full sample app playground on GitHub

With Flutter 3, you now have the option to release your app directly to the App Store or via TestFlight. Once you’ve published your app, you can update it by releasing an incremental version. This is similar to how Android apps are released, where Google Play acts as a central hub for app distribution and updates.

This release adds a new API for reading and writing Blob images, making it easier to use assets in your app wherever they’re stored: on a user’s device, in a cloud storage service like Google Drive or localStorage, or the static files of your server.

The new Router API gives you fine-grained control over handling navigation requests from your users.

Well, that is obvious, Flutter is not just about expanding the framework’s platform support. It is also about making it more accessible to everyone from app developers and UI designers to software engineers and entrepreneurs.

Flutter 3 has built-in support for the new RenderScript for Android, which means that its users can harness the processing power of the device’s GPU to perform complex operations on large datasets (for example, stabilizing a video or blurring a photo).

Thanks to the Dart Native Image Generator (native_image_generator) package, you can compile native images of your Flutter app ahead of time. This means that your app loads instantly even on slow networks because no application code needs to be downloaded at runtime.

What will you See Next in Flutter?

Flutter has already come a long way and there are more updates and features on the way. Here are some of the upcoming changes that you can expect to see:

Flutter 3.1 will bring support for plugins.

With over 1 million downloads already, Flutter has already established itself as a high-performance mobile development platform of choice. The latest Flutter 3 update brings in a whole new level of functionality for developing high-end mobile apps.

With the support for Android Oreo and iOS 11, developers can now create the most feature-rich applications which run across different screen types and have the same user experience on both platforms.

Although Google highlighted the performance improvements along with an increase in framework usability from this update, it is evident that there is more to it than what meets the eye. Some pretty obvious changes make this version smarter than ever. 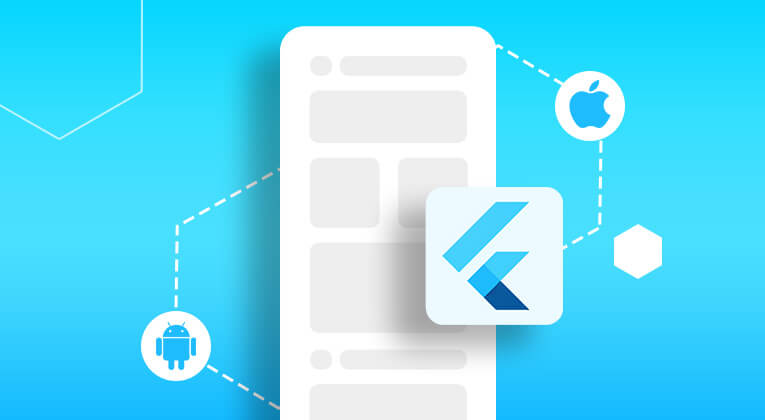 Do you hear people praising cross-platform... 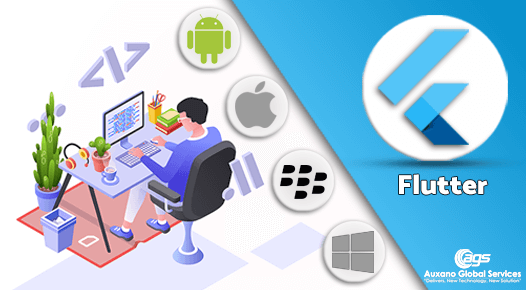 Why using flutter for cross-platform is an advantage?

Nowadays, convenience is the key to...