All The Latest Information Of Android 13 Update Available So Far!

What do people love more than experiencing a whole new operating system in their device without? Nothing, that’s the beauty of an update. Fresh things create a sanguine impact on User Experience and User Interface.

Android 12 update was released just a few months ago in October 2021. With Android 12, Android 12L was also unveiled for larger screens with the Android system. Now, the launch of Android 13 is predicted to be in September, and google codenamed it as a dessert called “Tiramisu”.

The Android 13 name is derived as a sweet by following the legacy of Google to codename the android updates after a sweet.

Android 13 is going to be released after the stable release of Android 12L. Some sources revealed a glimpse of the upcoming android update. We have brought this glance with the best to our knowledge and verification for facilitating an understanding and planning for the Android 13 launch.

What is the Android 13 update?

The successor of Android 12 is the thirteen major versions of the Android operating system. Android 13 will have the codename Tiramisu, which is a coffee-flavored dessert. Every Android update’s codename is decided after different sweets.

Google is working on the early stages of Android 13, and the expected Android 13 release date for the stable version is September 2022. Features revealed are likely uncertain, the sources provide a glance at what it will look like but can’t be assured at this early stage.

For some reason, the information is dependable because of several reasons. One is that XDA developers shared exclusive images of the upcoming Android 13 and also unveiled some new features. The second is that the company had shared screenshots of the unreleased version of the Android 13.

Google has worked in a distinguished manner for Android 13 and it can be looked upon as a game-changer for the operating system.

Have a look at this video for a better understanding.

How will Android 13 Enhance the Operating System?

Every update brings something better or with technological advancement to the device. Android 12 brought unique updates like a Privacy dashboard, visual indicators for camera and microphone, and many more.

Android 13 is also expected to bring up some game-changing and cutting-edge updates. The screenshots and information revealed suggest the listed down updates that android 13 features will bring.

Bluetooth Low Energy (LE) is the future of wireless audio streaming through Bluetooth. It is predicted that Android 13 will bring the first-ever release with complete support for Bluetooth LE audio.

This technology consumes less power compared to the classic BR/EDR audio standard. As the user will experience an improvement in battery life. Adding to it the new advancement allows a single device to broadcast audio via Bluetooth to multiple devices.

Bluetooth LE technology adds to the quality of stable connection and aids accessibility. It will also integrate with hearing aids, without compromising even a little for audio quality via Bluetooth.

Android 12 already has partial support for Bluetooth LE, but it requires improvements for complete compliance to the standards. This feature is supported by Mishaal Rahman in the AOSP, suggesting that the A2DP codec will get the highest priority when connecting to an audio device.

Android 13 may be the first release to add full support for Bluetooth LE Audio.

Google recently merged an LC3 (the LE Audio codec) encoder and is adding the codec as an option in settings. It’ll be the highest priority A2DP source codec.

Android allows multiple user accounts on a single device. But, even for the latest Android 12 update, the users weren’t allowed to configure and make NFC payments through their secondary accounts due to security reasons.

The new Android 13 update is going to slide off the security concern through making contactless payments via MFC even through the secondary accounts on the device.

3. Android 13 extends the language customization to an even app-by-app basis 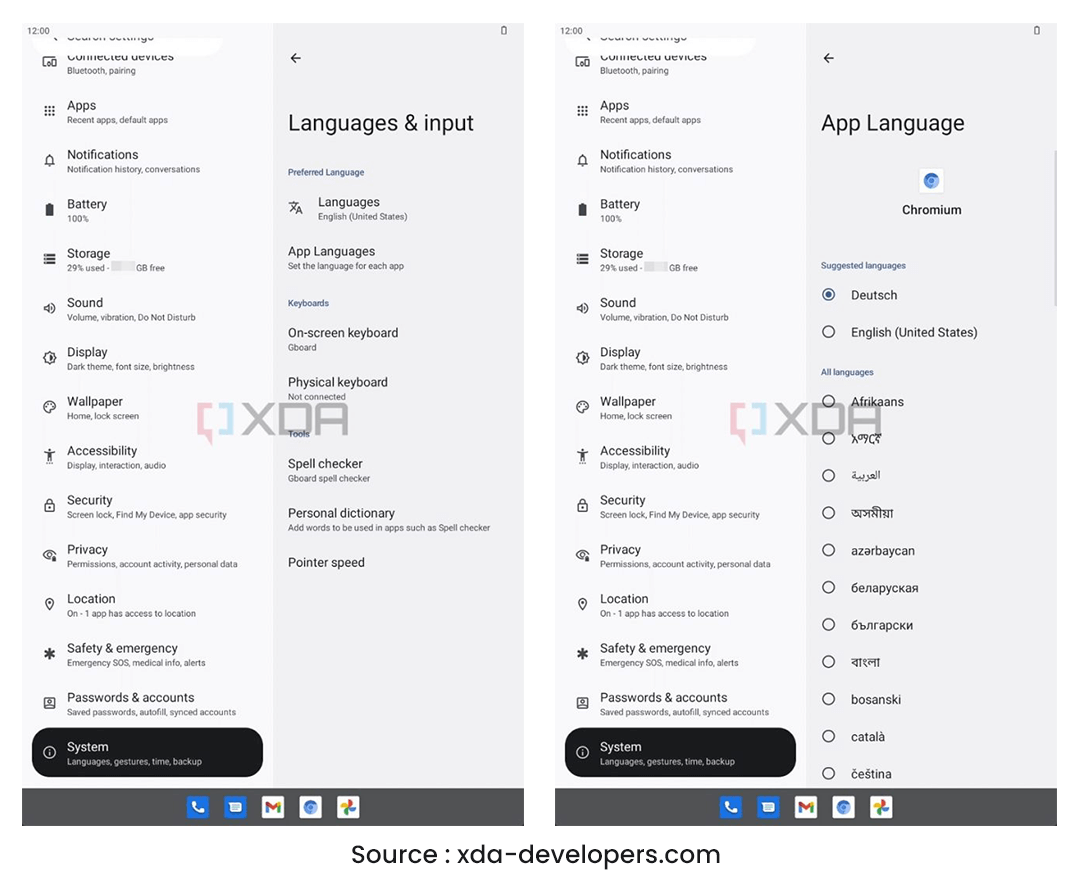 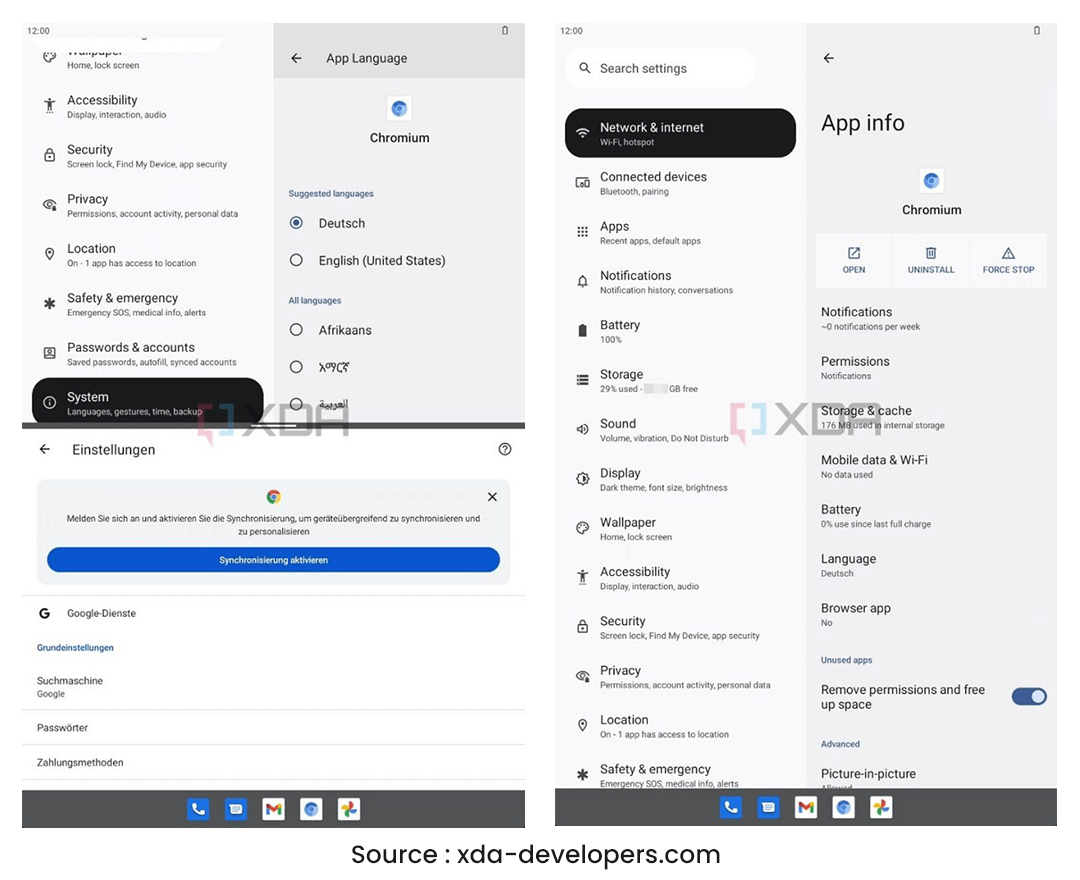 While android is popular for letting the users choose their preferred language from a wide spectrum of options provided. The barrier here was that the language customization was limited to be applied only on the device, not on the apps.

The successor of android 12 is coming with not only universal application of chosen language on the device but also per-app basis. Before this, the apps were given an option to set up language customization on their own. Due to which only a few of them took the effort to do it.

But now with the latest technology codenamed as ‘Panlingual’, android 13 will let the users make changes in the language settings on a per-app basis. This system is separate from the universal system-wide language setting.

As an example, you can have an app for messaging working with the Hindi language while keeping the UI system and other apps in English UK. This information is guided by the screenshots revealed by XDA. 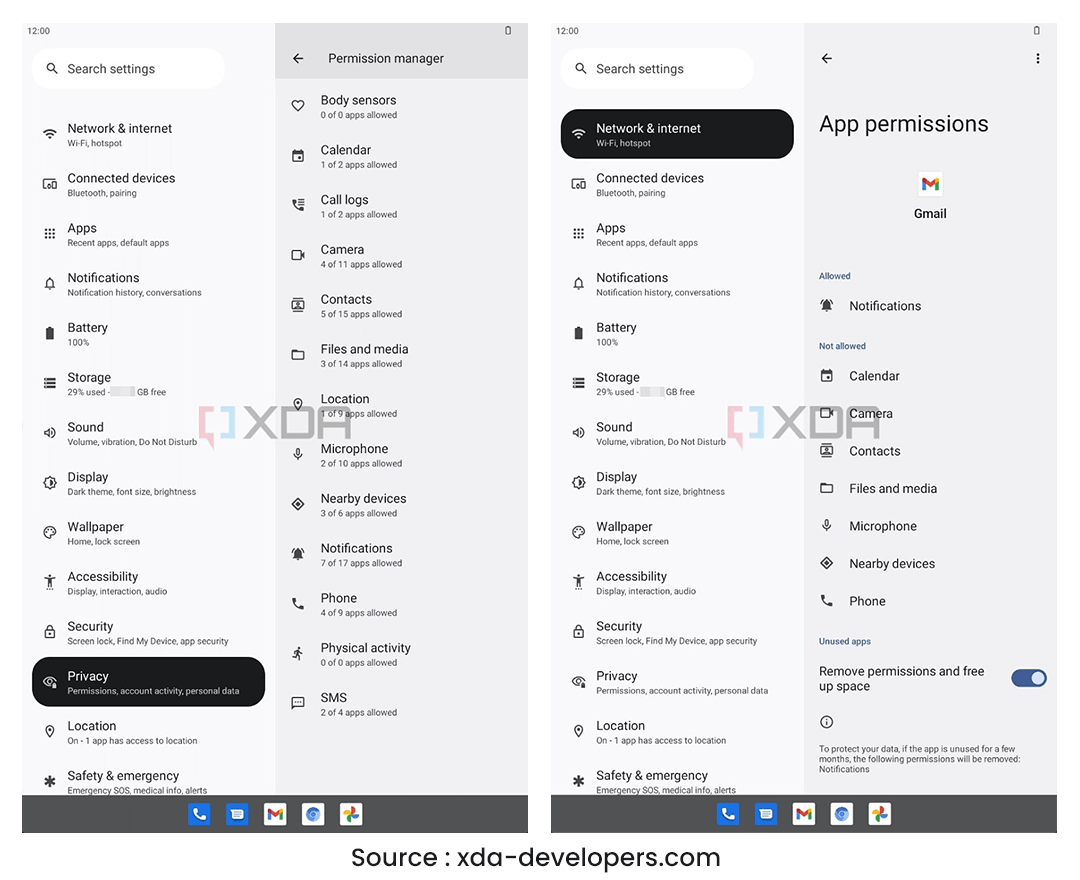 Push Notifications are very annoying; therefore, this new system reduces them by making notification an opt-in feature. Similar to permissions for the camera, location, and contacts, apps in this system will have to ask for permission for the type of notifications.

The user will have the flexibility of choosing what kind of notifications they want to see. One can have access to delivery notifications by a shopping app but not for push notifications. 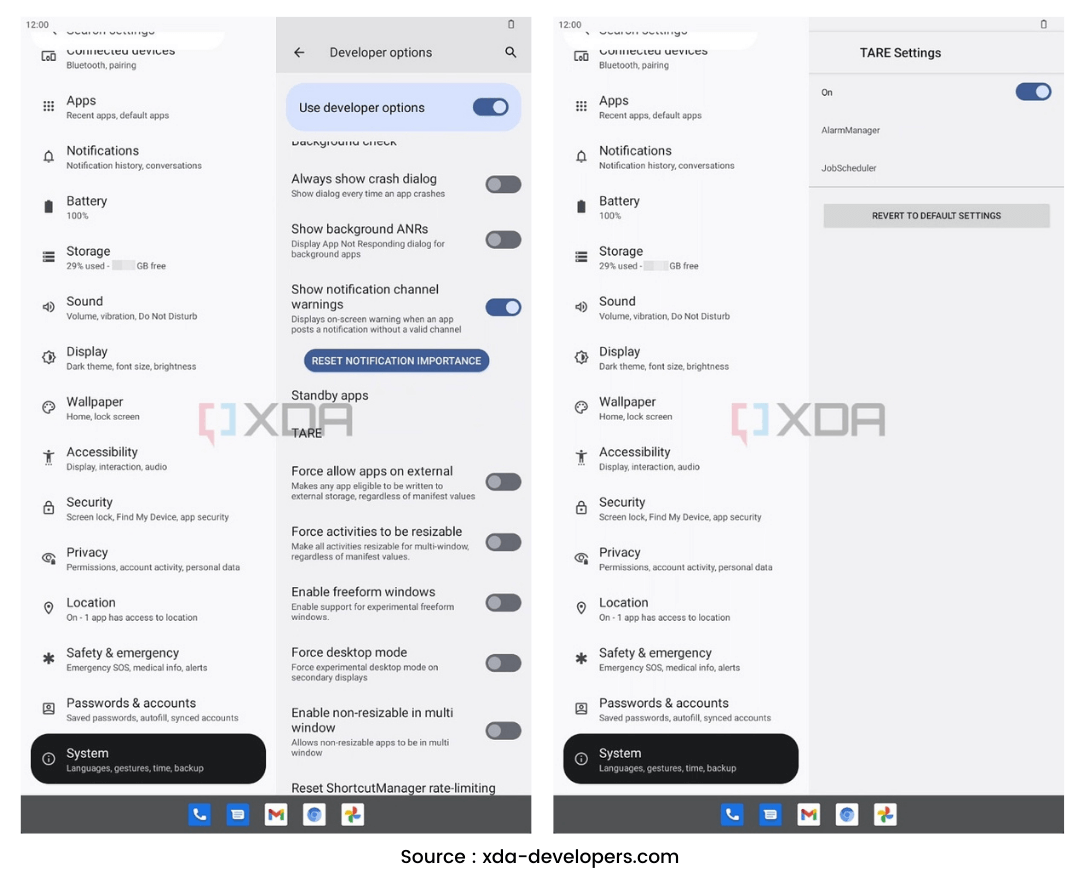 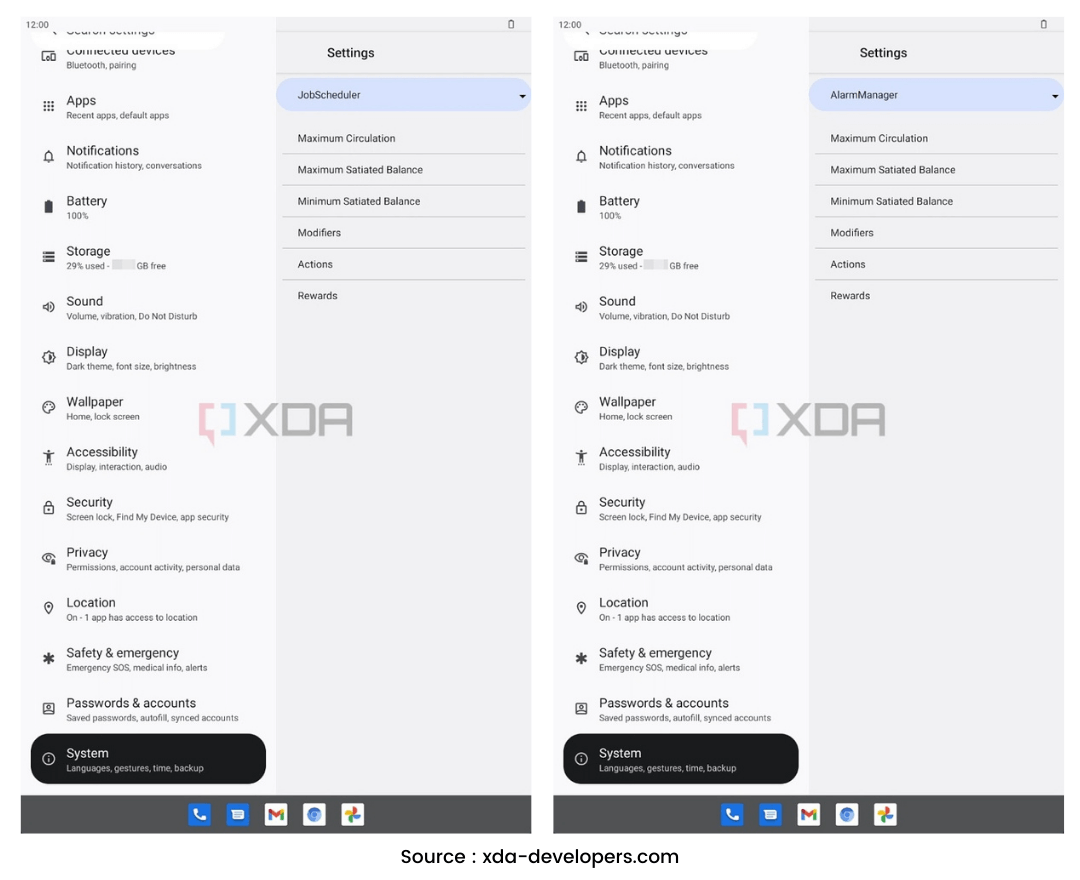 Focusing on the device’s use of energy management, Android 13 brings a new energy management feature called the Android Resource Economy. It is going to work through Android’s Alarm manager and Job Scheduler policies.

It was reported that this technology introduces a form of currency connected with a device’s battery level. It is for energy-use management on the device. Introducing android resource credits for the app admins.

Through this google will be awarded credits to apps based on how depleted the battery is and in what way the app can manage with that. Apps can use these credits as payments for an opportunity to perform tasks. It sets limits to how many tasks an app can schedule depending on the battery level.

6. Android 13 is likely to give users a Single-Line layout for Lock Screen 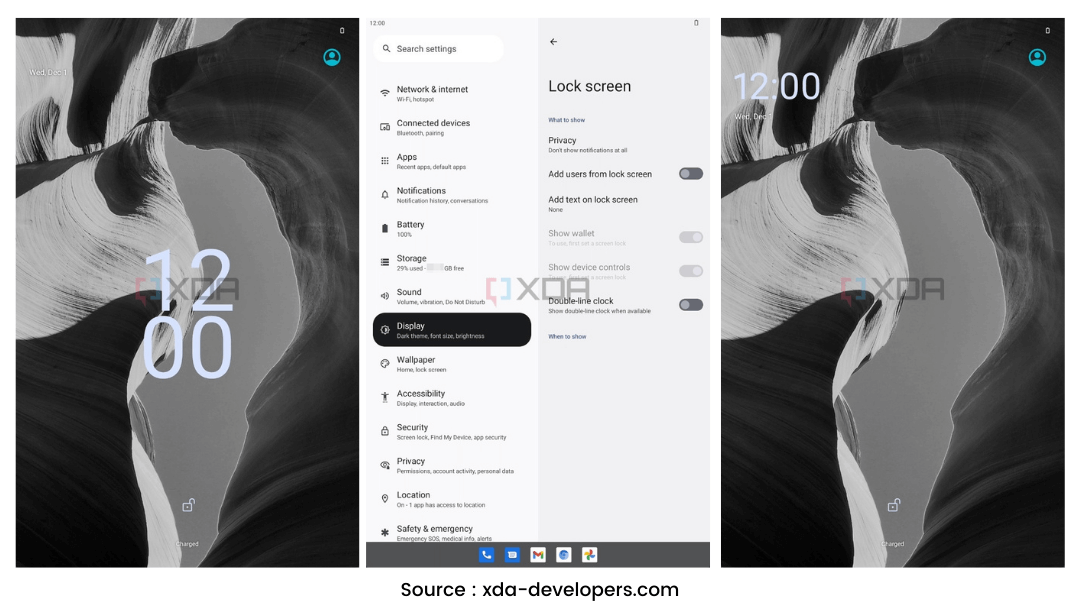 Users demanded a change in android 12’s layout. The new layout introduces the clock on the lock screen with a double-line and changes to a single-line when new notifications arrive. It changes back to the initial double-line layout when notifications are gone.

Although many users requested Google to revert the layout to the single-line layout. This demand is likely to be fulfilled in Android 13.

7. Android 13 is going to bring support for DNS over HTTPS (DoH)

All other systems of android preceding Android 13, used DNS over TLS. This system was good at security and privacy but had some loopholes due to including third parties encrypting data on UDP (User Datagram Protocol).

DNS over HTTPS works by directly sending via the HTTP or HTTP/2 protocols instead of via UDP. A recently merged code change in AOSP has indicated adding DoH support to Android 13.

Mobiles that can Upgrade to Android 13

Here we have made a list to let you know about Android 13 compatible phones.

5.  OnePlus – 7 devices of OnePlus can be supported by android 13

6. Realme ­– android 13 is compatible with 5 devices from Realme

7. Vivo – users of 2 devices from Vivo will be compatible with android 13

8. Honor, Nokia, LG – 3 devices from these three companies each will be compatible with android 13.

For a complete list, you can have a look at this and understand the upcoming market even more.

Why should you upgrade to Android 13?

The leaks and unveiling of features have revealed that Google will bring several unprecedented benefits for users. Through the well-thought features of Android 13 Update will solve many problems they were facing in the past.

Going with the reports by XDA, we can conclude that the spectrum of features is to ease the usage of mobile devices for the users. The plan seems to streamline and provide security with the best and user-friendly approach.

The reason for upgrading to Android 13 lies in its features.

How is Android 13 beneficial for app owners?

The few features mentioned above benefit the app owners. The new android system brings the lower risk of hacking and third-party inference through DNS-over-HTTPS. App owners can leave the worries of security and focus more on other functions.

With language customization even for apps, the app owner doesn’t need to invest separately for multiple language integration. The panlingual technology will let the app owners be free of this responsibility as the android will be in charge of it.

With multiple account payment options for NFC payments, and more secure the app owners will be able to take transactions ahead at a different level with creativity. With credits through battery level management as an app owner, you can enhance your services for consumers.

Further, in a short period, the Beta version of Android 13 will be released and with the developer’s preview, the app owners can get deeper insights into the new technology and trends.

Have a look at the updates for Android 13 through various sources till now.

1. December 24 – On this date, Mishaal Rahman, said that Android 13 will have complete support for Bluetooth LE audio. For this update, XDA developers also shared some of the expected features of the upcoming Android 13, including Runtime permission for notifications, Individual app languages support, new lock screen clock layouts, and The Android Resource Economy.

2. December 14 – According to the reports and information given by Minshall Rahmaan, google is predicted to allow users for toggling on/off the phantom process killer in Android 13.

3. September 25 – XDA – developers spotted various changes in the AOSP abbreviated from Android Open Source Project code. It also unveiled that Google may include DNS over HTTPS support in the upcoming system, earlier it was DNS over TLS.

4. August 26 – Google’s mobile device Pixel 6 will have Ultra-wideband support as the company is already working to expand UWB support in the upcoming Android 13.

5. July 27 – On this date, according to reports, Google decided the dessert name of Android 13 as the internal codename called Tiramisu.

How to follow the flow of the Android 13 launch

Some expected timelines and dates are here. These will help you understand and plan for the future with the Android 13, the dates in the future might vary as Google is in the early stages of development.

Android 13 is going to be a game-changer for the mobile industry and app development. With the features listed above app developers will have to comply with those features to make a successful mark on the new system.

Users and App owners both are going to benefit from the new android system. This guide for preparation can help you in strategizing, planning, and researching the upcoming changes in the market and ways to excel in it.

Auxano Global Services is the Top bespoke mobile app development company with experts working passionately towards better app solutions. Our professionals keep themselves updated with every kind of technological advancement and learn it for delivering better services to our clients. Work with experts of the industry to leverage a successful entry into the new Android Operating System codenamed as “Tiramisu”.

If you want to ensure cutting-edge app development for Android 13, Contact us now. 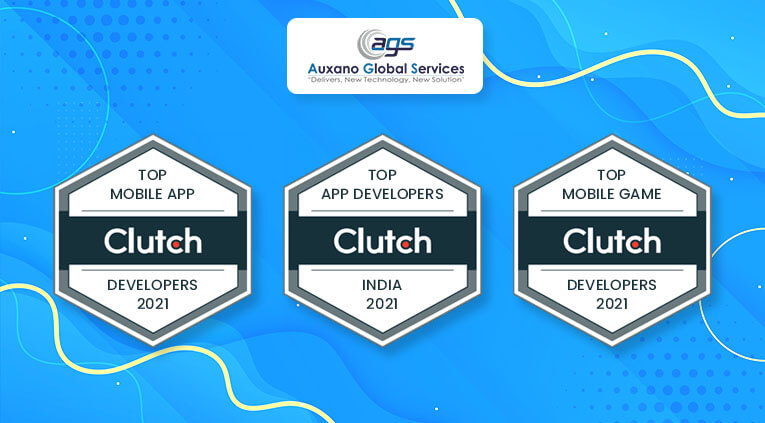 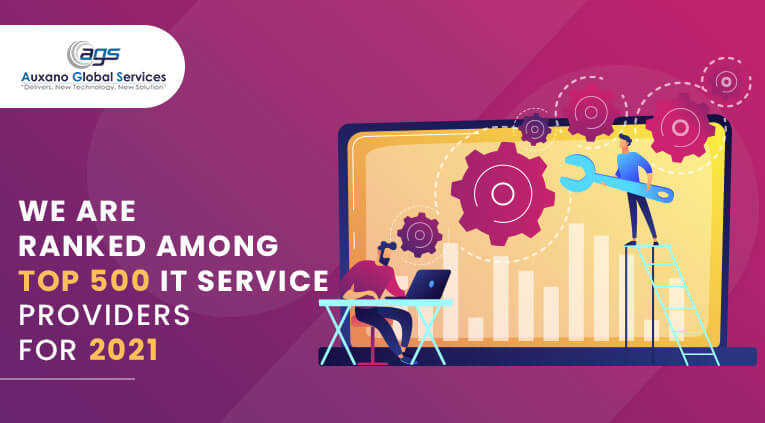