Why You Should Use Android Go For App Development?

Tackling the issues of speed, storage, and efficiency is a vital part to enhance the performance of a project. Even mobile phones suffer these issues sometimes. The models with lower processor, memory, and other older hardware meet with a constant problem of device lagging and application crashes.

After an analysis of all these scenarios, Google decided to bring forth Android Go, an all-new operating system for the mobile devices that will be able to run smoothly on the low-hardware devices as well.

Being a leading Android Go app development company in USA, we are well acquainted with the benefits of Google’s Android Go. Here we are explaining why Android Go is suitable for your project. But before diving into the depth, let’s talk about the basics first.

What is Android Go?

Android Go is an improvised version of the older Androids. It is sufficiently lightweight and solves the issues of speed and memory in the smartphones that are devoid of the latest hardware. Android Go will set the stage for more low-budget smartphones and ensure their well-functioning even with slow processors, less memory space, and lesser available data.

Up till now, every time an operating system was launching, the existing phones were getting older and outdated, pushing the smartphone companies to research on developing new smartphones. The latest smartphones are so built that the hardware can support the new OS efficiently, without causing any performance issues. However, the scenario reversed when Android Go came on the platter.

With an intention of Google to make smartphones available to a larger population, it came up with the lightweight and memory-efficient Android version, the Android Go. The tech giant has incorporated changes in the three major sections of the Android – the OS, Apps, and Play Store.

Android Go has derived the operating system from its ancestor, the Android Oreo. It consumes half the space as Android Nougat. So, Android Go is suitable for allowing the lower hardware smartphones to run a larger number of apps and store data.

Another essential feature of Android Go OS is that the applications are opened 15% faster than other Android versions. Allowing the feature of ‘data saver’ ensures that Android Go assists in consuming fewer data.

Google presented the lightweight versions of the apps as the OS. YouTube Go, Gmail Go, Google Go, and other smaller software allow much faster opening and performance in the smartphones that use Android Go. Since then, every Android Go app development company is designing Go specific versions of the applications.

The Android Go Play Store is similar to the already existing version. It consists of all the applications as the original Play Store does. But it also has a suggestive feature for recommending the smooth Go apps, that are specifically built to suit the Android Go running smartphones.

The smartphone brands did not miss to catch the benefits and features of Android Go. For this reason, many smartphone companies are utilizing the new OS. As of now, Samsung Galaxy J2 Core, Redmi Go, and Nokia 1 are seeing the latest OS.

Why Use Android Go For Your Next Project?

Apart from being extremely lightweight and efficient, Android Go has even more features, making it suitable for a plethora of projects.

These are a lot of benefits to count for justifying the use of Go in your projects. The list doesn’t end here. There are even more benefits to unveil for using Go for the projects.

How to Create an Android Go App?

To develop an application for Android Go, you must follow a strategy to optimize the regular apps and make them fit to use with the lightweight OS and its supporting devices. You can choose any of these, or simply hire Golang app developers:

Have a common app to support both the Android and Android Go operating systems. For streamlining the size of apps according to Android Go, you can use the Android app bundle that saves up to 65% of the size.

Keep the apps separate. Design one for Android Go, and the other for all other Androids.

So, these are the strategies that you must choose wisely and follow to develop a streamlined application for Android Go. However, you also have the option to submit all your app development worries to the top mobile app development company in USA and get your applications optimized for working even with the low-hardware smartphones.

All in all, the Android Go brought ease of use, convenience, and better performance to the table. Also, greater compatibility in a host of verticals makes it suitable for use in your projects. 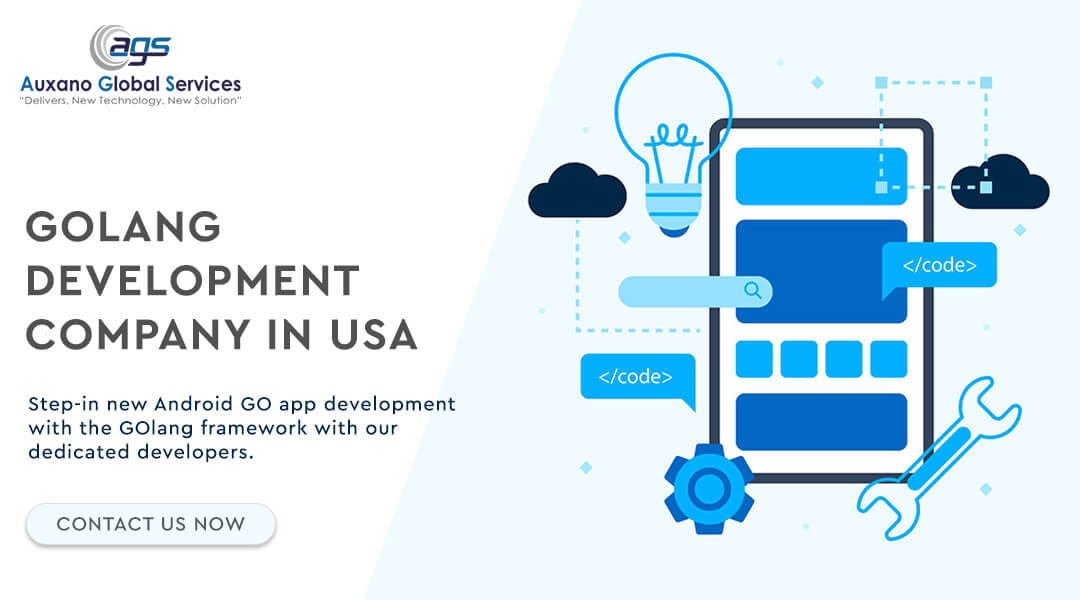 If the screen still seems hazy, and you want to get more out of Android Go and its applications, without getting your feet dirty in the pool, you have the option to work with the Top Golang app development company in USA , Auxano Global Services. Contact Us to create a masterpiece solution using advanced technology.