With an impetus to the online dating culture, more and more conventional dating apps are crowding the pool. Primarily, these apps focus on the ideal match-making business for straight people only. No one was concerned about developing a dating app for LGBTQ people till now. As time is advancing, the mindsets are evolving leading to massive acceptance of LGBT preferences. Interestingly, the app developers are devising dating apps for the rainbow community as well.

Finding like-minded beings, confessing, and speaking publicly about the liking was almost infeasible for the bisexual society as of now. The commencement of LGBTQ dating app culture is making love accessible to all without a gender bias.

Are you a dating app firm, wishing to enter the space of LGBTQ dating?  If yes, then your goal should be acquiring the excellent features of dating app giants like Tinder in your dating app, while aiming at stepping forward towards some more LGBTQ embracement.

In this particular article, Auxano Global Services, a renowned dating app development company, brings to you the 8 most popular dating apps for the LGBTQ community. Also, we are jotting down exciting features of top LGBTQ dating apps such as Grindr, Scruff, Thrust, and Hornet. Peruse this article and get a fitting insight. 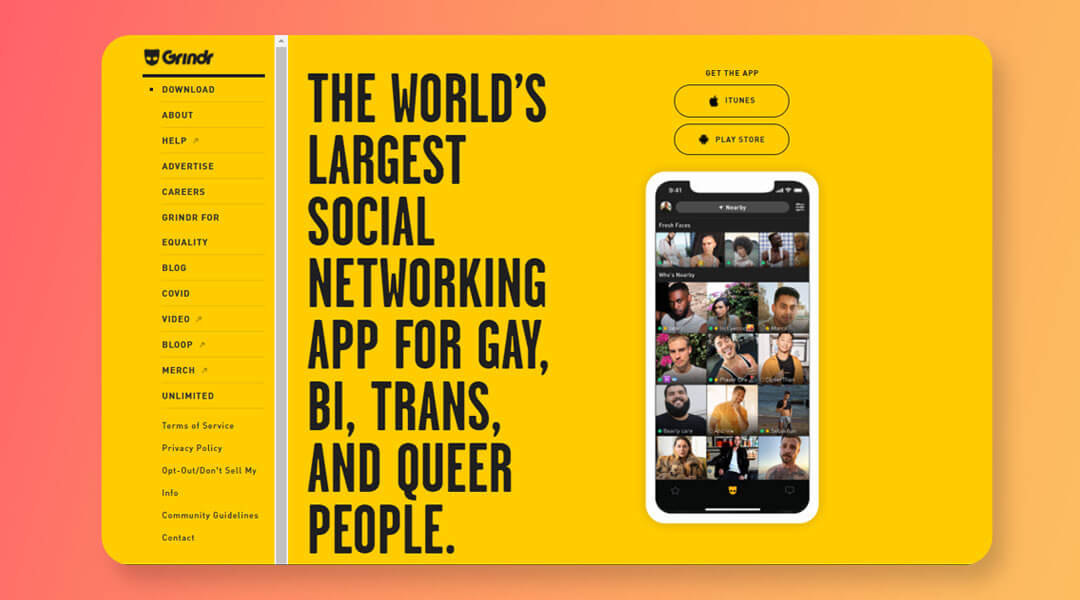 Grindr is a unique dating app for gay society. The excellent interface of Grindr allows for easy navigation and using the app. Based on your geolocation, you can interact and meet with numerous people on Grindr for multiple gay hookups.

A legible layout presents the male profiles in a grid, making it possible to filter out the desired men easily. Also, Grindr ensures a safe environment with active blocking features that restrict a profile from engaging with you any further. 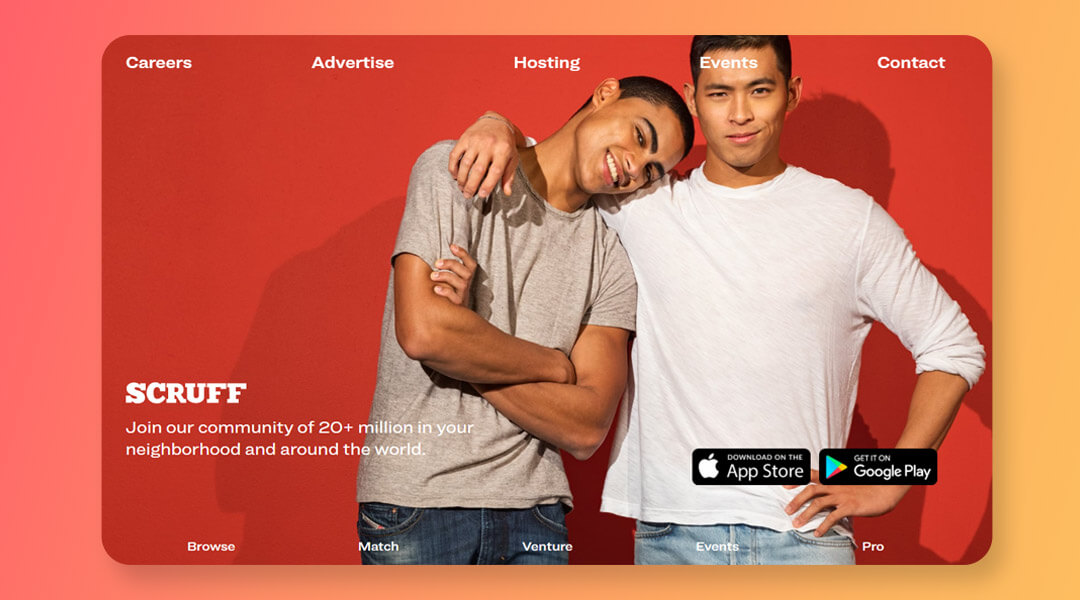 Scruff is another leading name among LGBT dating apps. Made to assist the gay love-hunting, Scruff has an easy registration process than other similar apps. Scruff allows its users to put up multiple stories and pictures on their accounts.

Also, you can find an elaborate messaging history within the app. In addition to all these, Scruff keeps the users updated with all the latest happenings in the LGBTQ community worldwide. Boasting a huge library with regular enlargement of the app community, Scruff is often referred to as the “LGBT Tinder“. 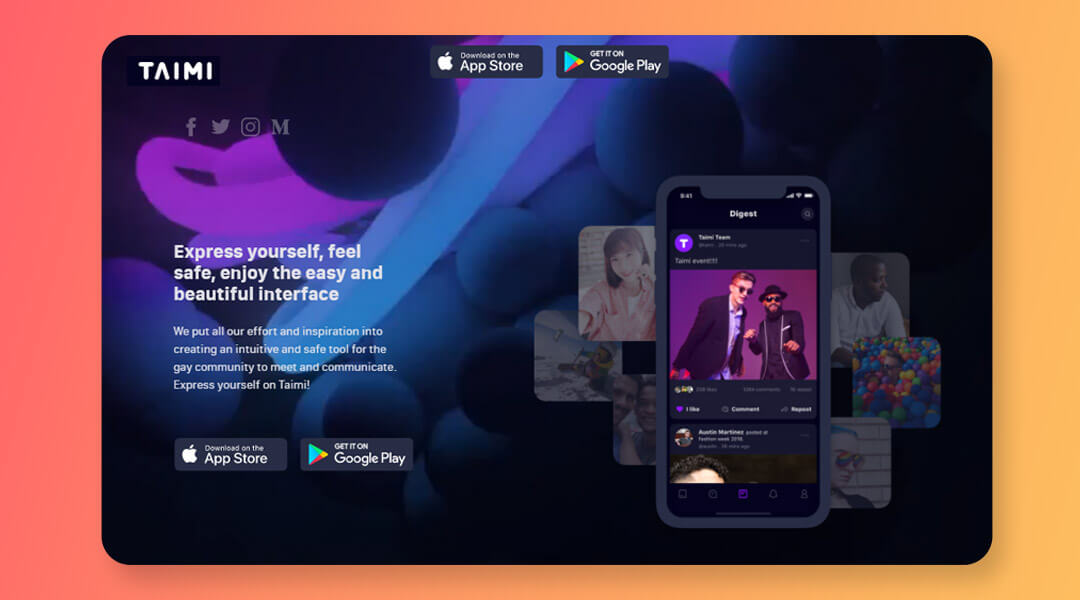 Love meets safety at the Taimi dating app. With robust security features like fingerprint recognition and pin locking, Taimi allows the LGBTQ community to enjoy all the spectrums of happiness in their love life. Much like a straight dating app, Taimi lets the users find better matches and interact freely with any liked profile. Moreover, Taimi entails chatting, video creation, and posts and story uploading features within the app. 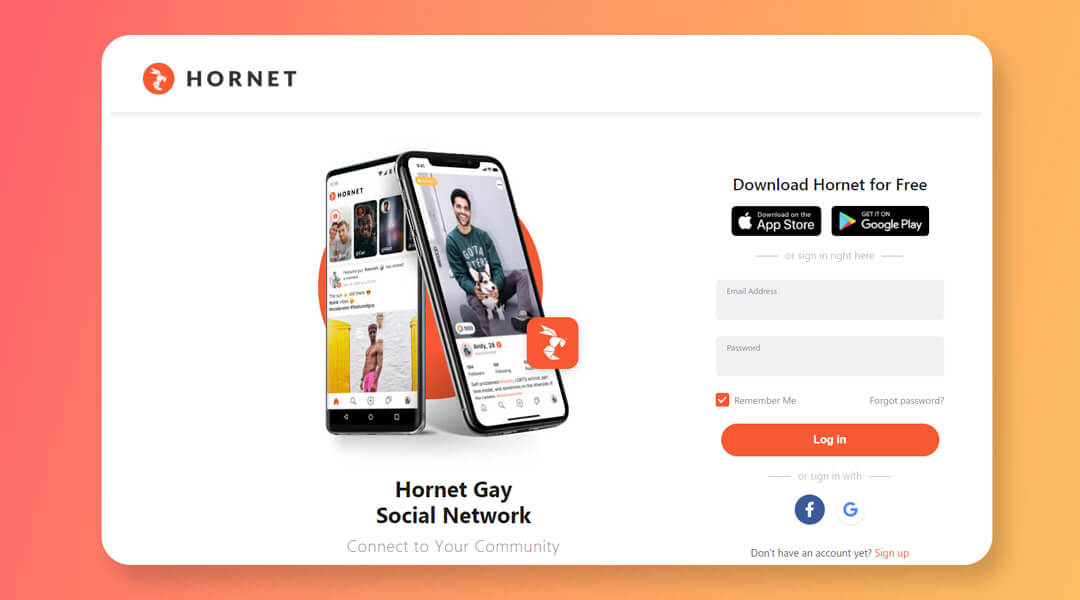 Hornet works on an interest-based matchmaking approach. All the users require to feed in their information, preferences, and interests. Based on these details, the Hornet algorithm finds and shows only the matching profiles for exploring and taking things further.

Even the posts from only the preferential profiles interacted with accounts, and influencers are displayed on the Hornet feed. Adding to user safety, Hornet prioritizes privacy and secured dating through the app. 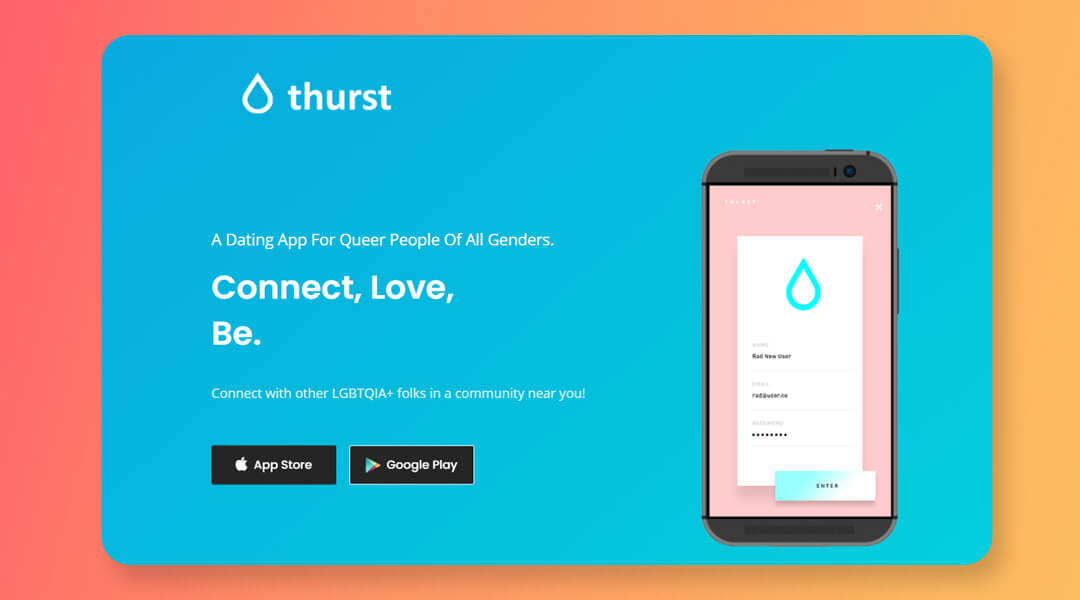 Thrust is a revolutionary dating app for the trans community. Other LGBTQ app assists lesbian and gay people in finding their love of life. However, Thrust walks one step ahead in helping out the transgender and queer community to find ideal matches within a safe environment.

Thrust leverages strict protocols inside the community and provides the users with a blocking option in case a profile violates the policies. Based on a location-based searching mechanism, Thrust enables the users to choose from trans, queer, and homosexual categories, and explore the interesting profiles safely. 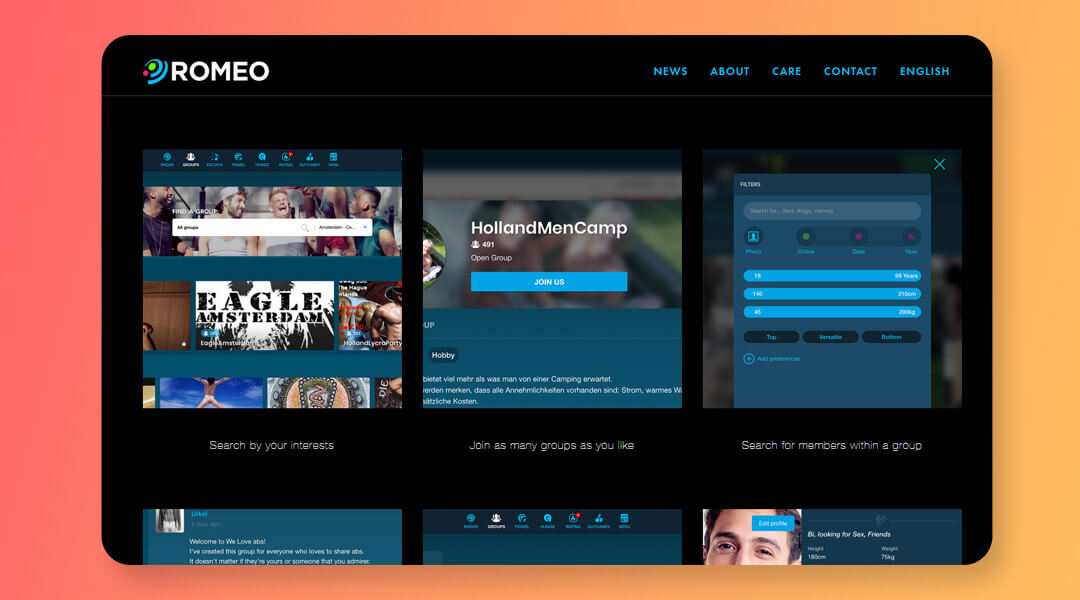 When talking about the most primitive LGBTQ dating apps Planet Romeo comes into the picture instantly. Launched in 2002, the Planet Romeo dating app has a massive community of non-straight people. Despite being the oldest player, Planet Romeo provides multiple latest features to the users. Elaborated profile details, preferential searching, and unrestricted browsing sets PlanetRomeo apart from the crowd. 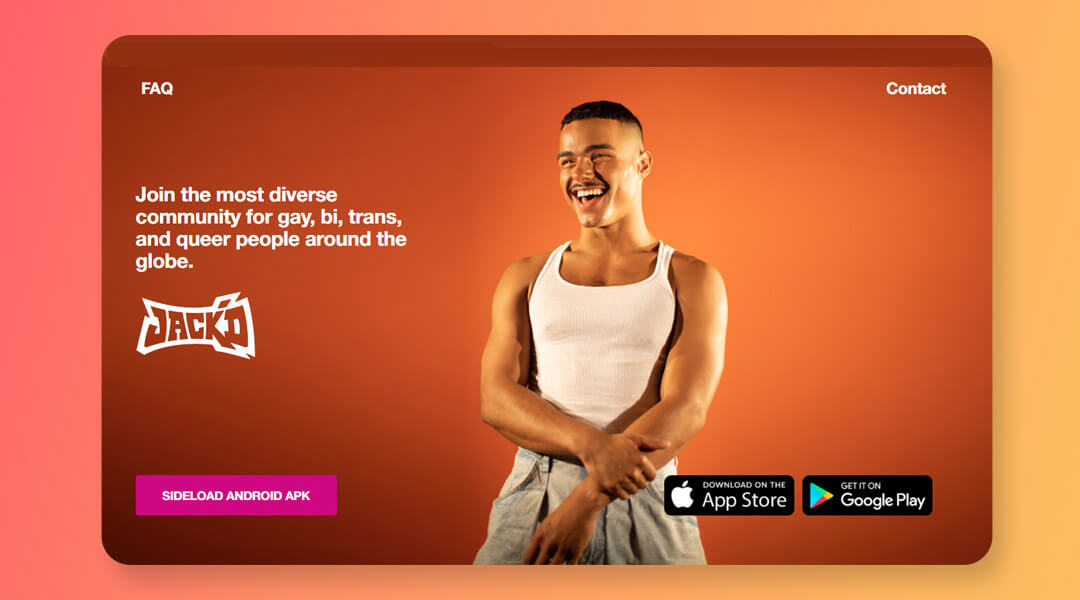 Jack’d dating app is the love-paradise for all the colours of the LGBTQ rainbow. Another primitive dating app, Jack’d gained tremendous popularity for being more specific to cultural and preference-based matchmaking.

Jack’d replaced the conventional dating app feature of swiping and provides the users with two options, yay or nay, for liking and disliking a profile respectively. The geolocation driven dating app has a premium version even that encompasses more features and allows interacting with the premium profiles as well. 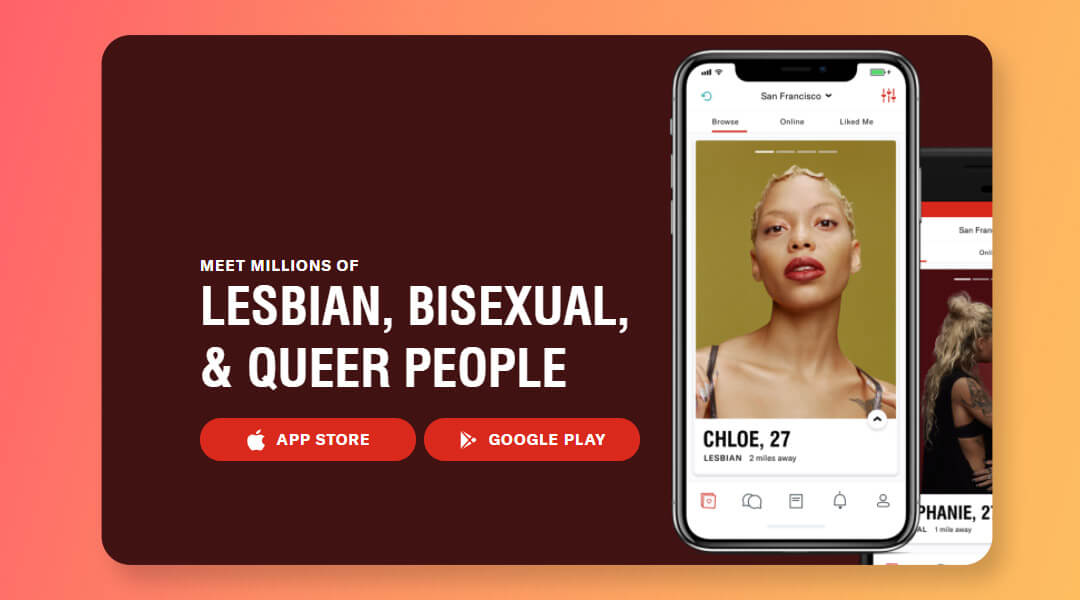 As the name suggests, Her dating app is specialized in lesbian and queer matchmaking. Integrating to the security, Her app community is a society of verified and genuine profiles. The app has various relationship setting modes making the love-hunting process even more interesting.

Moreover, Her app hosts parties and social gatherings for enhanced interaction between like-minded people across the globe. Her app also informs about all the surrounding queer events to its exclusive user base.

The rapidly growing LGBTQ dating app culture requires more apps with a safe, discrimination-free, and embracing ambience. The eight leading dating giants have attracted a massive chunk of the rainbow community who are interested in living life on their terms. Still, the LGBTQ community requires safer and secured apps that keep privacy and respect at the top of the priority pyramid.

Are you willing to launch such a comprehensive LGBT dating app? Auxano Global Services comes to aid you in terms of the latest app development technologies. Our professional app developers are well-acquainted with the expectations and requirements in the LGBTQ app industry. Based on the industry and technological knowledge, our team can develop the best LGBTQ dating app with more features than the existing apps. Get in touch with us today!