This pandemic has changed everything from our lifestyle to our choices. Isn’t it right?

Let us tell you the most current news and opportunity that is waiting for you.

There was a buzz around the international market that this pandemic initiated from China, and since then, countries are planning to boycott Chinese products. Hence, India’s government already started this by blocking 59 Smartphone applications, including the most popular entertainment app like TikTok, Helo, and WeChat to combat the threat posed by these applications to the sovereignty and stability of the country stated in the press release.

Besides, the mobile apps ShareIT, UC client, and other shopping apps like Club factory is also included on the list of blocked apps.

This article will also name all the apps blocked by the government. This is the best market opportunity for the entrepreneurs of the era to take over these apps’ market by creating such mobile apps with unique features and grabbing their consumers.

These apps are being blocked in the wake of the increasing tensions between the India-China border after the clashes.

As per the government, these apps are engaged in practices “prejudicial to India’s autonomy and independence, protection of India, state security and public order.” This ban on apps was enforced under section 69A of the Information Technology Act, the related provisions of the IT Regulations 2009, it is stated that the government also cited concerns of Indian consumers moving data abroad without authorization.

Besides, it is also said that this is the exploitation of smartphone apps to intercept and surreptitiously transfer the user data to servers outside India. 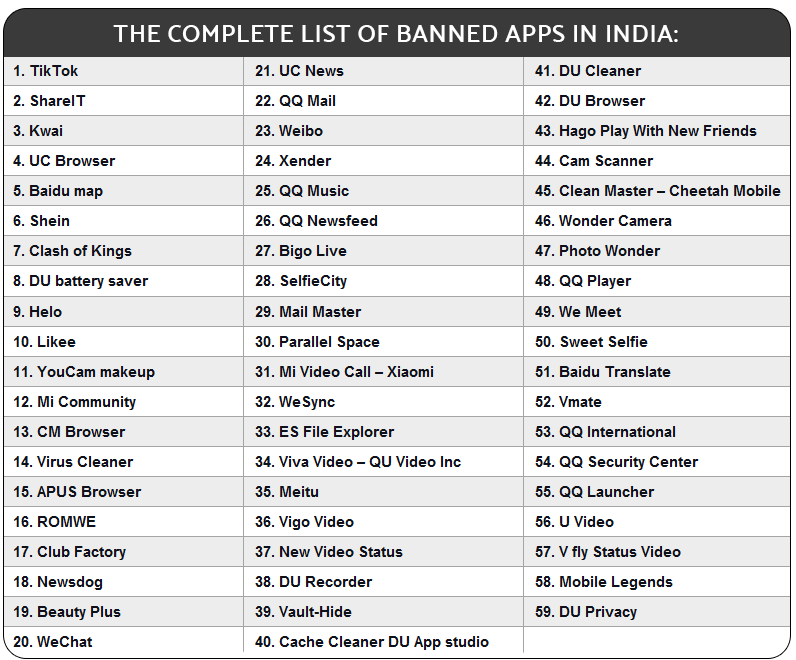 Where The Opportunity Lies

As we all know that these apps are going to be banned in India due to privacy and data concerns. Hence, it is a call for marketers and business people who want to develop an app like TikTok, Helo, Vmate, and all these 59 apps. Because they were getting high revenue from India, and if you provide such apps with security and great functionality, you will grab their market.

For instance, the document scanning app CamScanner has 100 million Indian users, with 4 million new installs in June. This app generates revenue through ads and premium subscription plans. As per the Sensor Tower, it approximately made $1.94 million in-app spendings by the users.

Similar to these apps, there are various apps like Tiktok and UC Browser, Helo apps that earn millions of revenue from Indian users.

Due to the ban on Chinese apps, many Indian companies can boost their revenue because now the response will be different. As the market competitors are banned now, the search rate for entertainment will increase, and people will find a new app for their entertainment purposes. Besides, a surge in demand for app development will boost mobile app development companies’ revenue in India.

As the demand will surge of mobile app development to fill the void of these banned apps, people will also crave creativity only then you can appeal to more users by offering uniqueness. Integrating creativity will make a difference in applications, and the same niche of apps will be represented differently. Hence, if you wish to substitute for these apps, don’t forget to hire creative mobile app developers who can add some uniqueness and creative functionalities to your app.

Indian economy rate will also rise due to this step because now, Indin apps will take the place of these Chinese apps, which will eventually generate revenue and improve India’s economy. You can consider the example of TikTok, the most popular app that generated a notable amount of revenue from India. The ban of this app will give a chance to other similar apps of India to generate a large amount of revenue.

How To Leverage This Situation?

To leverage the current situation and to make most from this, you just need to hire a top mobile app development company in India that can help you develop your desired app with all the functionalities that you need to cater to users. Just pick one app and take advantage of mobile app development services to enter into this existing market. We can bet that you will see how the Indian population will welcome the apps made in India and give them the services they need.

As per the Indian Union Minister of Electronics and IT, Mr. Ravi Shankar Prasad said that “The ban on Chinese apps will give a great opportunity to Indian technocrats to develop Indian Mobile apps. which will be in line with the government’s Clarion Call of Atma Nirbhar Bharat.”

Besides, the mobile app development will not generate revenue from India; through the app, you can enter the international market.

The report by Statista depicts, mobile apps are predicted to generate $188.9billion as global revenue by the year 2020. Now let’s discuss that if you want to hire a mobile development company, what measures should you take?

If you agree that this is the right time to grab the Chinese apps market, then the next step is to decide how you will plan your app to perform for users. You must know that if you want to grab these apps’ market, you have to represent your services better.

Hence, you have to hire a mobile development company that delivers the best and expert mobile app development services.

Note: We would suggest hiring a professional mobile app development company for this work rather than hiring noobs or freelancers.

How much do mobile app development costs?

This is the most disturbing question that you might be thinking. Right!

“How much does it cost to build a mobile app?” This question does not have a certain answer because the mobile app development cost depends on various factors, such as the type of mobile app that you want to create.

To find out the actual cost of mobile app development, you can contact the company directly. Tell them your idea and requirements and they will provide you with all the information on the cost. The cost may also vary if you want an app for a specific platform or both the major platforms Android or iOS.

If you can select the right technical partner, you will have a smooth and bug-free experience. Hire mobile app developers by taking interviews personally to make sure you invest your hard-earned money in the right place.

You can also take advantage of the additional services to make your app up and to run, such as maintenance & support and marketing. Marketing services make sure that you stay ahead on the search engines and reach your potential consumers.

Hence, choose wisely and don’t let this opportunity slip away from your hands.