Being a renowned React Native app development company, we have immense expertise in cross-platform app development. We have ample experience in customized feature-rich mobile application development that is compatible with multi-platforms. 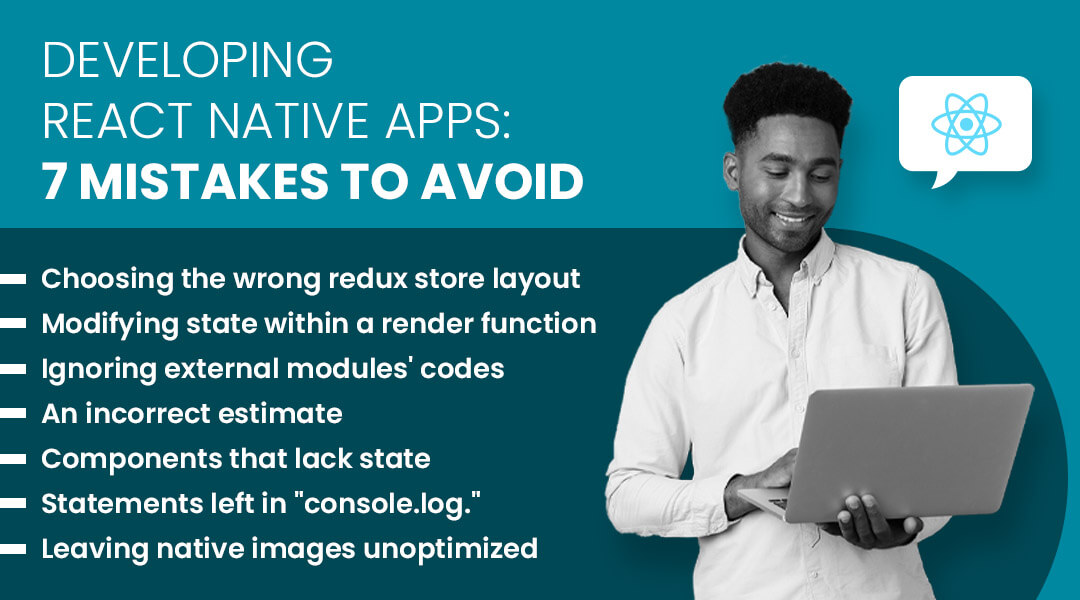 Developers tend to focus more on planning the design of the application rather than the processing of data when working on an innovative project.

With Redux, you can store data correctly and manage and debug app states. When planned properly, it can serve as a valuable tool for managing app data. If not, it can cause many problems.

Additionally, it should be noted that Redux is not highly suited for small projects when it comes to application development. This is because you will be required to write a significant amount of code, even for small changes. Therefore, it is better to choose React Native for large-scale applications and avoid it for small-scale applications.

2. Modifying state within a render function

Data contains all of the information regarding a component that will be displayed on the state. The program collects and displays data from the store. Using the set state() function in React, you can take the new object state and compare it to the previous one. Once this has been done, a new state will be added to the initial state, and data will be sent around.

This cycle would run in a vicious circle. A direct mutation would cause the life cycle to be tangled, and the previous states could be corrupted.

Appliances can sometimes display abnormal behaviour or crash. This leaves you with no idea of your state and creating custom code instead of React. If you directly modify the state, you can get these fixes. Thus, to avoid ruin, you will create a child component and pass down the prop of the content inside the function.

External modules often save developers a lot of time. In addition, the documentation makes things easier and faster.

Even so, it is more likely that modules will break or they will not work. As such, developers should take this step seriously as a React Native best practice. This enables us to determine why a module isn’t working and how to fix it.

The layout of the application varies from the Android version to the iOS version.

It is suggested to make an estimation of the validation layout based on the information provided currently. Compared to a hybrid app, you will have to write more codes when using the React Native framework.

There should be a review of several backend endpoints. A clear logic should be apparent in the app with regards to the database structure and how entities are connected.

Stateless components, however, mean they do not extend classes since they use arguments as display and props in the DOM. Features include:

With the passage of time, the development community is increasingly focusing on pure components. Here are the reasons –

UI applications with complex UIs will benefit from this since rendering operations will be reduced. It uses a life cycle method called shouldComponentUpdate, which performs automatic comparisons followed by a check to see if a re-render is required. Whenever the parent component re-renders a stateless component, the component will re-render. Pure components, however, are re-rendered only if the state or props change.

Within componentDidmount, developers can generate AJAX requests or conduct other DOM operations.

If your render methods and logic are kept inside, primarily those asynchronous, the JavaScript thread can be bottlenecked, which is a severe problem. Combined, all of these factors slow down an application.

The picture optimization within React Native apps is not something you want to ignore as a developer. Optimization permits resizing localized images then uploads them to a cloud storage server like S3 to get a CDN URL that will be returned via API. This method can speed up the loading process of images.

There is no such thing as perfection. When it comes to developing applications through React Native, it’s best to follow a guided path that helps you eliminate mistakes. While the above-listed are seven significant mistakes developers can make, other secondary issues might arise. The goal is to complete the react native app development process with minimum mistakes to deliver promising results.